If you’re not into football and don’t have the luxury of attending a Swanky Super Bowl party where the color scheme is more important than the actual plays here are a few tid-bits to help you navigate through the evening of a traditional Super Bowl party. 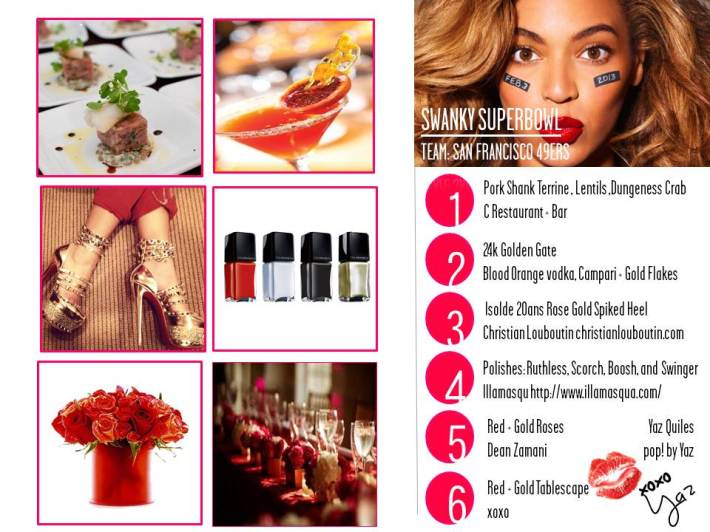 A friend of mine recently called me all excited about the Beyonce Concert this weekend. She went on and on about the songs she’d likely perform, costume changes and the possibility of Destiny’s Child joining her on stage. Apparently she missed the occasion surrounding the concert (half-time show) also known as The Super Bowl! (sigh) I’ll be the first to admit that I am not an avid watcher of football; however my LoVe’s passion for the sport has somehow permeated into my world. Who knows by this time next year I may be hosting a traditional Super Bowl party???? Hmmmmm….

In the meantime, this post is dedicated to those who could care less about the game, but want to have a swanky affair and be able to say – I had the most fabulous Super Bowl party and truly mean it! Invite your besties, put your freak’em dress on and celebrate the BIG GAME! It would be sort of like the VH-1 version of Football wives…. Sexy and all about the glitz and glamour with a hint of football.  I mean it is a Super Bowl party after all…. PS. No throwing of cocktails of any kind! The drinks are too fab for that!

In a cocktail shaker, combine Charbay Blood Orange vodka, Campari, freshly squeezed orange juice, lemongrass-infused simple syrup and a dash of Angostura orange bitters. Add ice, shake and strain into a cocktail glass that has been rimmed with superfine sugar and Oro Fino edible gold flakes .Garnish with a sugar figurine placed through the slice of blood orange, and sprinkle a little more gold on top.

Jack Daniel’s presents Quarantine & Cocktails – The ALL-DAY Party! Saturday, April 11th, 11AM – 11PM EST on IG LIVE. Music is definitely food for the soul and I got some nourishment for ya! We’re taking over IG LIVE and featuring your favorites from across the Nation! 11AM-1PM @DJBigBen 1PM - 3PM @DJPaolaShea 3PM - 5PM @DJTrauma 5PM - 7PM @poizonivythedj 7PM - 9PM @djneweranyc 9PM – 11PM @DJAktive Tag a friend and come spend your Saturday with us! @JackDaniels_US #JackLivesHere #JackLive #popbyyaz #NGP #stayathome #VirtualParty
We've been waiting for this! #AKidFromConeyIsland now available on digital https://geni.us/AKidFromConeyIsland @AppleTV @StarburyMarbury @35Ventures @KDTrey5 @richkleiman @SLAM Documenting the rise, fall and rebirth of ex-NBA star Stephon Marbury, A KID FROM CONEY ISLAND was directed by Coodie & Chike, produced by Nina Yang Bongiovi, Forest Whitaker, Jason Samuels. Executive Producers include Kevin Durant and Rich Kleiman.
“Don’t Touch Anything” Creative Direction and Photography: @chefbabybear1
We are truly heartbroken over the loss of our brother Eric. Praying for our collective healing, comfort, strength, and peace during this painful time. Melissa, our hearts are with you forever. We will eternally remember Eric with the love and light he left us. Rest in peace, Eric Santos.
Taking a break from the news cycle is necessary for our #mentalwellness. 💆🏾‍♀️We hope you take this advice from @essence and use this time to watch your favorite doc on @netflix. ❤️Tag us if you’re tuning in! 📺#shedidthatfilm #socialdistancing #netflixandchill #strongblacklead Repost @shedidthatfilm
Let's create some impact now! The past month has seen an unprecedented number of event cancelations in the US and worldwide. It has impacted so many of my friends, colleagues, my company included. So what can we do? I'd like to encourage the event industry, especially my fellow producers, to encourage clients to postpone their events rather than cancel whenever possible. Delaying revenue vs losing it completely. Let's all continue to support small businesses in any way we can as these businesses are dependent on our support for survival. Sign the Change.org petition for Federal Aid for the Event industry. Let's sound the alarm on a massive economic catastrophe that is transpiring in our nation. Link in Bio! #saveevents #savetheeventindustry #covid_19 #covıd19 #coronavirus #eventpostponed #eventpostponement #eventcanceled #federalfunding
For the L🌺VE of flowers! #flowersofinstagram #nextgen
Yesterday we had the absolute pleasure of attending a beautiful lunch hosted by Purl Collective and Cloud Catering. We had great conversations on OUR future as the #NextGen of industry pros. Bravo to all of the vendors who showcased all of their talents. Venue Union Park by Purl Collective @unionpark.events @purlcollective Food and Beverage Cloud Catering & Events @cloudcateringny Entertainment Jarrell Entertainment @jarrellentertainment Decor + Florals AURORA by Keiko Ellis Photo Activation Capture Pod @capturepod Photography Stanley Steril Photography @stanley_steril Rentals Broadway Party Rentals @broadwaypartyrentals
So honored to be featured on @thevendry today, on International Women’s Day. I shared why it’s important for me to work with other women and people of color in the industry. I celebrate us not only tidal, but everyday! #popbyyaz #thrvendry #thatEXfactor #internationalwomensday Music Credit: Ocean by KV