So with Valentine’s Day is right around the corner and floral shops are getting ready to cash in while restaurants are overflowing with reservations.   But how nice would it be to make your own centerpieces and prepare a sumptuous dinner for you and your special someone, right at home?

In a 5 part video series entitled, “PulledTogether”, I teamed up with some of the best industry professionals to show you how to you can “PullTogether” a special valentines day for your honey.

Up first is how to make a simple centerpiece by Emily Howard of Phileanor.

From Phileanor:
After apprenticing with two of the top floral designers in NYC , falling completely and madly in love with flowers and freelancing for nearly two years (in that order), I started Phileanor as an outlet for my own creative expression.  I felt that I had something different to offer than those I was learning from and working for simply because I possess a unique set of experiences that inform my way of looking at the world, which would in turn make my creations uniquely mine.  I am still defining my voice, but it’s been an incredibly rewarding process so far and I am excited for what the future holds in that regard.Going into this project, the only goal I had for my piece of it was that the flowers look good together.  I work best with clients that are somewhat flexible in their expectations and who trust that I’ll go the extra mile to make sure they get stunning work.  Luckily, the vendors involved in this project were like my dream clients in that they gave me the freedom to select a palette and flower combination that would really have some synergy.  Because this was a Valentine’s Day-themed shoot, I had it in my head that the floral palette should be fairly traditional – blush tones with pops of red and pink.  But it was all over when I got to the flower market the day before the shoot and stumbled upon the most beautiful variegated Japanese lisianthus I had ever seen.  Unable to resist its delicate beauty, I created the color palette around that single flower.You don’t have to be a florist with access to the New York City flower market to create stunning flower arrangements at home.  The better supermarkets, like Trader Joe’s and Whole Foods, usually carry a good variety of high quality flowers.  An even better option is your local farmer’s market.  If you have some masking tape, sharp scissors or clippers, and an empty vase (you can even use an old jar), you have everything you need to make an arrangement fit for a romantic dinner at home.

DIY Centerpiece from Mae B. Films on Vimeo.

Tune in for Part 2!
XOXO
Yaz

I can’t believe it’s been a full year since my first segment on Arise 360! I have the biggest appreciation for my very special friend Sheila for bringing me into this world! xo Muah!
If you missed my Holiday Entertaining segment on Arise 360 here’s your’ chance to check out my tips on creating a chic and festive Holiday Soiree.

Thanks to Lola, Shannon, Sheila, Eka, and the whole Arise Team for having me. Also, a  very special thank you to Adonis, Raedawn and Fallon for helping me pop! on camera. It takes a village to make the magic happen.

With each visit to the Arise Studios, I have seen Lola’s little baby bump grow and now it’s time to celebrate this most amazing occasion.

If you missed out on the LIVE airing of Arise 360 on Arise TV, you still have an opportunity to see my Baby Shower segment for the ever fabulous Lola Ogunnaike. I created a Winter Luxe theme, which is simply perfect for a gender neutral shower. Will she have a little Prince or Princess. Click on the link to see!

Stay tuned as I will be sharing behind the scenes shots and tips for throwing a perfect Baby Shower.

Congrats to Lola on your blessing! 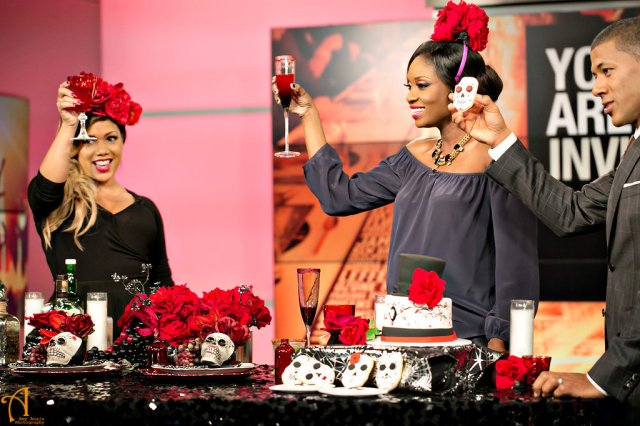 Keep the spirited celebration going with Dia De Los Muertos cocktails! Below are three alcoholic and non-alcoholic cocktails you and your friends can indulge in. 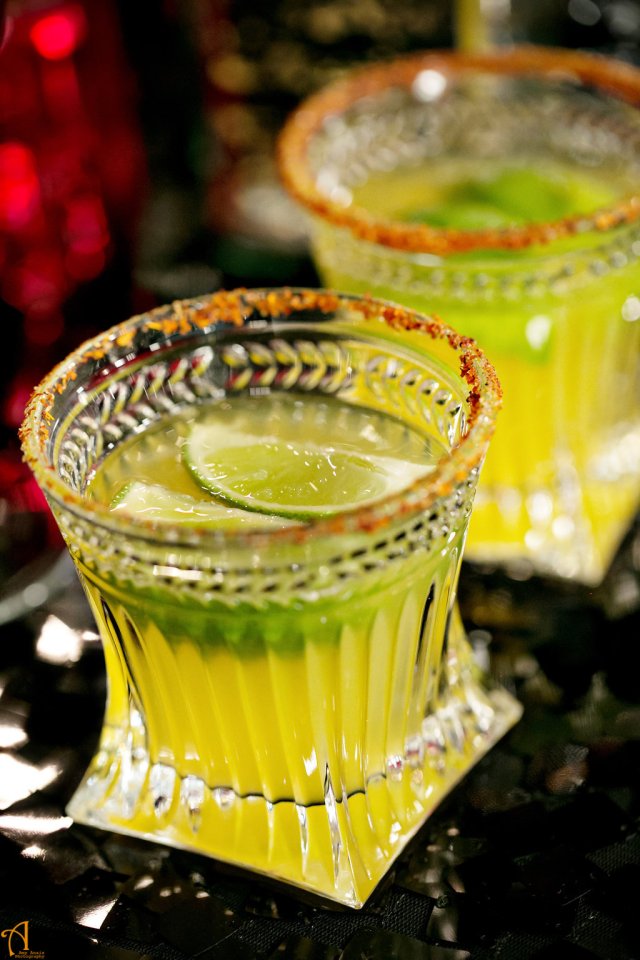 Garnish with slice of jalapeño

Inspired by the Penicillin cocktail I had while in Paris 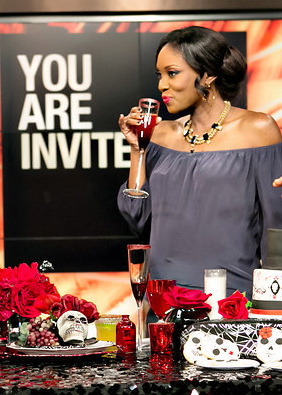 De Mi Sangre (Of My Blood)

Halloween is typically associated with carving Jack o’ Lanterns out of pumpkins, decorating with a ghoulish theme, and going trick or treating door to door while wearing costumes. Instead of the traditional route, I wanted to introduce a holiday that many Americans are unfamiliar with, that happens to take place during the same time period. Inspired by el Dia de los Muertos below is a detailed look at my decor and ideas. This is a nod to my Latinos as this holiday is becoming more mainstream and now more with the help of pop… more glamorous!

This is me behind the scenes setting up the table 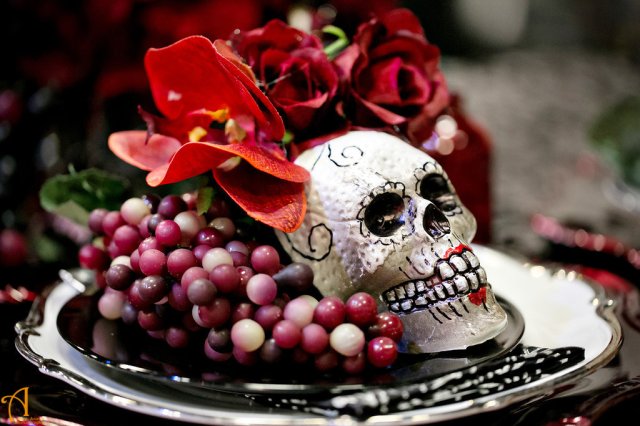 In order to celebrate, the families make alters and place ofrendas (offerings) of food, skulls and figures, candles, incense, yellow marigolds known as cempazuchitl (also spelled zempasuchil) and most importantly a photo of the departed soul is placed on the altar.

Traditional food you can prepare can include: 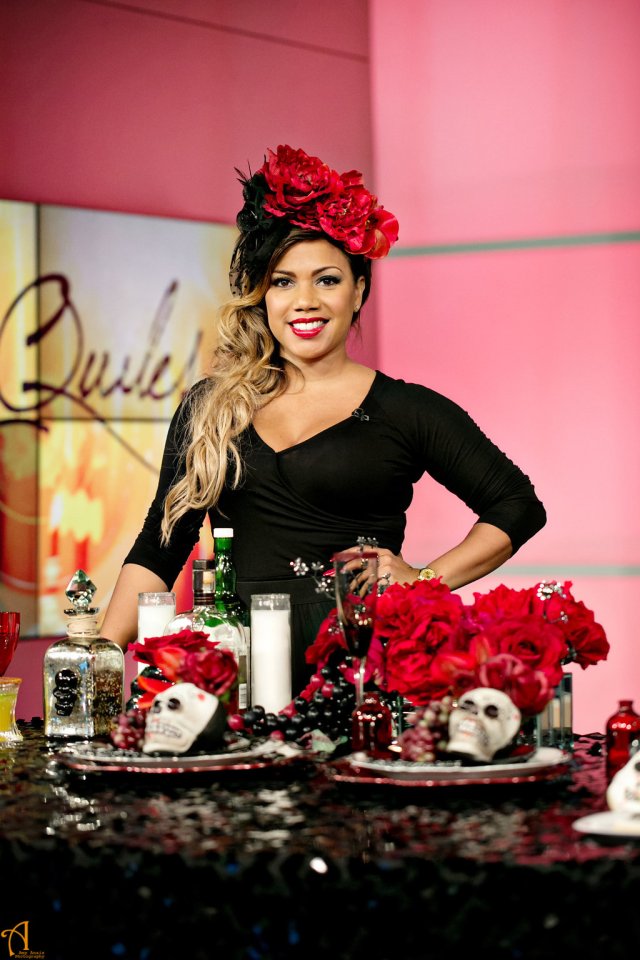 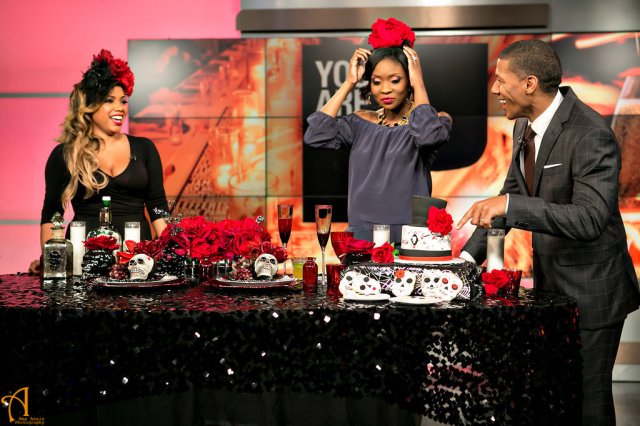 I just love my flower crown and Lola did too!
They’re super easy to make with a few faux flowers, a glue gun and and headband.

In Mexico, the streets near the cemeteries are filled with decorations of  papel picado, flowers, candy calaveras (skeletons and skulls), and parades. It is believed that the spirit of the dead visit their families on October 31st and leave on November 2nd. 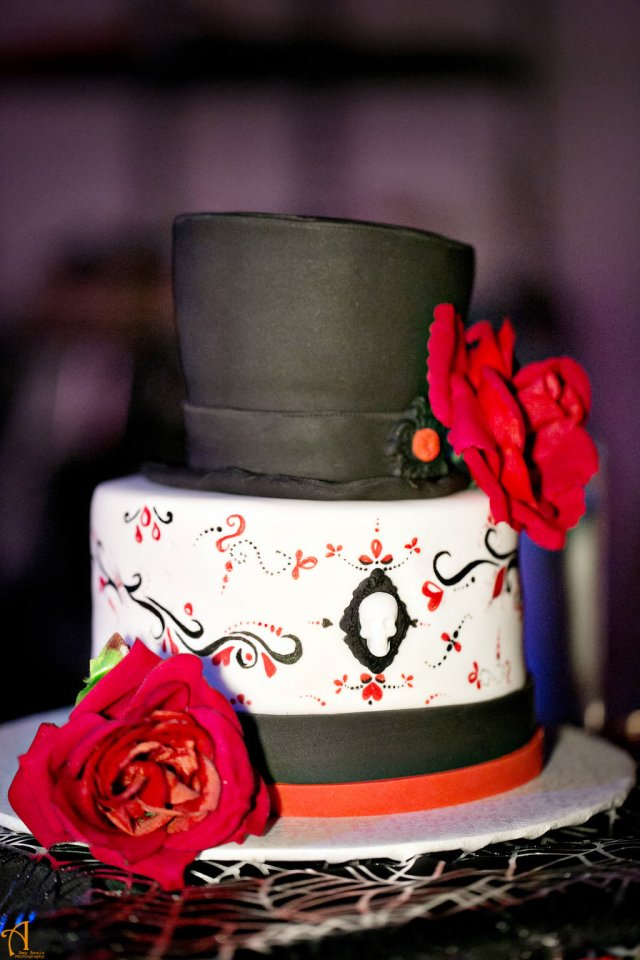 A red velvet cake made by IM Pastry Studio

Stay tuned… cocktails will be on the next post!

If you missed out on the LIVE airing of Arise 360 on Arise TV and the second airing on Centric, you still have an opportunity to see my Halloween Entertaining segment. Stay tuned as I will be sharing behind the scenes shots, Halloween decorating tips and recipes for all of the delicious cocktails.

Catch me tonight on Arise 360 as I host a Halloween Entertaining segment showcasing some tantalizing cocktails and party decor that will surely liven up the spirit of your next soiree!

We found our own little pocket of joy. #simplepleasures
Yes to amplifying the things that bring us JOY! ✨ Sounds like the perfect way to spend this holiday weekend. #shedidthatfilm #copingduringquarantine #popbyyaz #blackwomenentrepreneurs
LAS VEGAS! - We ready!!!! Jack Daniel’s Quarantine & Cocktails – The IG LIVE DAY Party. Saturday, May 16th 12pm – 6pm PST on IG LIVE. Music is food for the soul! We’re taking over IG LIVE and featuring some of your DJ favorites! 12PM-1PM @DJEricForbes 1PM - 2PM @DJKarma 2PM - 3PM @djikon 3PM - 4PM @JeffRetro 4PM - 5PM @MellStarr 5PM – 6PM @Zomanno Tag a friend and come spend your Saturday with us! @JackDaniels_US #JackLivesHere #JackLive #popbyyaz #ngp
My excitement level is on 💯!!! We are excited to say Baby Quiles is on its way! I’m going to be a Tia and I’m over the moon! Congratulations to my little brother Kenny and Tami on the biggest blessing of all! Can’t wait to spoil my niece or nephew! Swipe to see how they announced it to me and the best part my #uglycry Repost @tami_gene This has been an experience already! The last two weeks we have been trying to share the news (from a distance) or behind a screen to some of our family and friends. Luckily, we were able to capture these precious moments! (Check our fb for the video!)💜💙🤰🏻 I do not have a face to see ,or put inside a frame I do not have soft cheeks to kiss, I don’t yet have a name. You can’t yet hold my tiny hands, Nor whisper in my ear. It’s still too soon to sing a song, Or cuddle me so near. But all will change come November  That’s when they say I’m due. I can’t wait to meet all of you. 👶🏻
Jack Daniel’s presents Quarantine & Cocktails – The ALL-DAY Party! Saturday, April 25th, 11AM – 11PM EST on IG LIVE. Music is definitely food for the soul and I got some nourishment for ya! We’re taking over IG LIVE and featuring your favorites from across the Nation! 11AM-1PM @DJBigBen 1PM - 3PM @DJAktive 3PM - 5PM @DJTrauma 5PM - 7PM @poizonivythedj 7PM - 9PM @djneweranyc 9PM – 11PM @DJPaolaShea Tag a friend and come spend your Saturday with us! @JackDaniels_US #JackLivesHere#JackLive #popbyyaz #NGP #stayathome #virtualparty #SupportDJs
Surprise Party from my LoVe @_nvs__ planned by POP! queen @abaynesh.jembere Join the Party @djaktive 8PM-10AM
It’s my birthday! Whether galavanting around the world or cozy at home with family I am grateful for the love that surrounds me daily. Feeling abundant and filled with joy! #boundlessyaz #popbyyaz #poptravel #happybirthday #itsmybirthday #taurusseason #blessed #love #travelnoire #tulum #akumal #mexico
H A P P Y B I R T H D A Y 🎂 To my Baby Bear, Child of Mine, Stinker, Tik Tok Princess... my everything! My world forever changed on April 22nd when you screamed, I mean sang your way into the world. With "My Girl" as the soundtrack I knew you were going to make a grand statement in this world. I love you more than seltzer water and hot sauce. Please join me in wishing Baby Bear a very HAPPY 10th Birthday. Follow @chefbabybear1 #ChefBabyBear #HappyBirthday #itzmyberfdayyy
NGP x POP! is partnering up with @woodfordreserve to showcase 12 amazing NYC bartenders to #showmeyourwoodford. Please tune in and show support to your local bartender during these times. 20% of all proceeds of your Woodford Reserve purchase on @drizzly will go to the USBG which is helping bartenders in need. Enter Code: WRBOTTLEGRAM at checkout to help us track donation amounts. Every Monday, Wednesday and Friday we will feature a different bartender. Tune in today, on Monday @frank.antonetti to see him make his #catalinabourbonmixer #showmeyourwoodford #woodfordreserve #wrbottlegram . . . . . #bourbon #bourbonwhiskey #mixologists #virtualevents#onlineevents #bartendars #nycstrong #nycevents #experientialmarketing #stayathome #eventsindustry #community #virtualevent